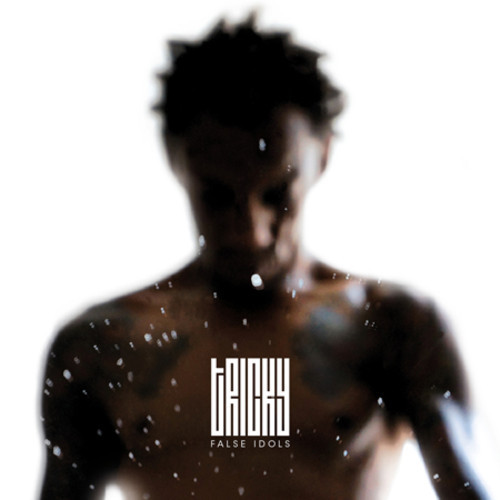 Good ole’ Tricky is out to get us again with his first record since 2010’s Mixed Race.

False Idols is the new project and is being advertised, as with most Tricky projects, by drawing comparisons to his groundbreaking and legendary debut Maxinquaye and also attacks today’s entertainment pop spectrum in it’s press release.

“Why the name False Idols? “Because there’s so much bollocks going on at the moment mate,” Tricky fires back. “People follow celebrities and read every little thing they do. It’s living vicariously through someone else. Get your own life. All this stuff is false idols. That’s what helps keep the status quo.” As to the label’s mission, Tricky puts it thusly: “I signed to Island because of the artists and some of the stuff they’ve done—Bob Marley, Tom Waits. Who could I sign to now? Am I going to sign to a label because they’ve got Lady Gaga? I don’t want to be part of that bollocks music industry. I’m trying to bring that Island kind of thing back. Obviously False Idols is never going to be an Island Records, but it’s my way of trying to keep that part of the music industry going.”

Since it’s a record highly influential for its time and even now, it makes sense to talk heavily about Maxinquaye, but the new project’s lead single “Nothing’s Changed” recalls lyrics from Martina Topley-Bird’s beautiful collaboration “Makes Me Wanna Die” off Tricky’s sophomore album Pre-Millenium Tension. The lead track also finds itself landing as if a blood-related, sonic brother to Mixed Race’s wonderfully engineered gracefulness, as opposed to the dense sonic spectrum of the one that started it all.

It’s all ironic, and taking away from the PR behind this new record, it’s still positively ironic given the song title and lyrical content. However, at the core of the song we’ve heard thus far, we have Tricky doing what he’s always done best: remaining eclectic, unafraid to borrow from his past works, draw from influences, and record undeniably raw vocal emotion from the artists on his guest spots. Along with Francesca Belmonte, other artists Fifi Rong, Nneka, and Peter Silberman have also given their helping hand to False Gods.

There’s also a cover of “Somebody’s Sins” by Van Morrison that we’re dying to hear.

It’s a short song, running at three minutes and nineteen seconds, but demonstrates that somethings have changed, but it’s all in the name of creating authentic pieces of music to unleash into the brooding world that surrounds Tricky’s untouchable discography.

False Gods is due out May 28th, 2013 in the United States. Snatch the free download of “Nothing’s Changed’ below.