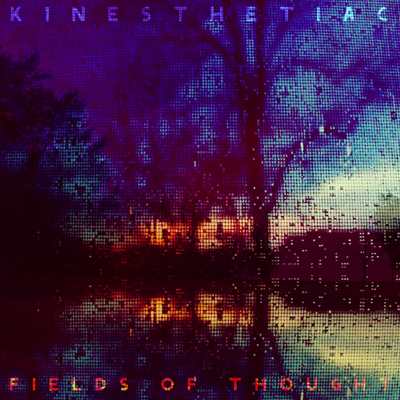 Indiana based Jared VanMatre, better known under the moniker Kinesthetiac was born in 1997 and has released a slew of ambitious chill out/downtempo Electronic music in the underground, independent music music scene. Filled with evolving melodies, driving percussion samples, and do-it-yourself programming, composing, mixing, mastering, it’s refreshing to hear the emotional depth and sonic layers within his music would pin him right up in a category of musicians that make a living off of labels like Ghostly International, Warp, Music70, Mute, etc, etc.

Though right now Kinesthetiac and his releases reside at Retronym records, where Fields Of Thought has just been released and has grown to become one of our top records of 2012 so far.

It’s opening track starts off with a piano-based introduction called “Empty Corners” and continues sprinkles of melodic solo pieces mid-way through the album on “A Garden Path” and the outro track “Free”. It’s an interesting way of allowing the album to flow through natural, mechanical means and barrows from the approach Aphex Twin took on Drukqs, but simply allowing the piano pieces to melodically further the album and allow established breaks between the highly programmed tracks.

“Mind Castles,” the third track on Fields of Thought plays like a track we’d hear from Orka Veer, but with progression. Toward the middle of the song, the structure steers far away from it’s original foundation and laments a minimal and sentimental synthesized solo that provides a unique breakdown before trudging right back into the Dream-pop champion feel of the flowing production.

A remix of a Memoryhouse track called “Bonfire” also makes its way as one of two Kinesthetiac remixes on the record, and also contains the same creative mixing technique, while manipulating vocals to give the song a Pogo or even, sometimes, a slightly dark Crystal Castles feel, recalling the vocal warping on “Violent Dreams” off their sophomore release.

Don’t let all of the comparisons to noted artists fool you, as you can clearly hear influences from all over the EDM spectrum, Kinesthetiac stands self-rulingly on his own. “Head Cold” is one of the more experimental pieces on the record that contains a sort of brass section that interestingly has a delay on it to give a trance feel it. It’s not often that a brass-esque feel has been brought to Electronic music in this manner, and the progressive build up is one to be commended for as well.

Chillwave influences make their way on “Transends” with a nicely used parallel compression technique that uniquely squashes the pads with each strike of the kick drum. Later on, “Fragments in time” sets its song structure up to a warm synth-bass feel and sampled vocal stutters that experimentally drive the track along it’s stream of consciousness, but is fearless in that it will occasionally break away for a measure to allow the other instruments and musical bits to have their own moments in the track before building up to yet another wonderful euphoric climax.

The most absorbing part about the entire Kinesthetiac experience is that this amount of emotion, this programming, the melodies, the rhythms, song structure, mixing, and mastering are all from VanMatre and he is just fifteen years old. While must teenagers are going through their high school years trying to find their niche and hone in on their craft, Jared’s got it and if he knows what’s good for him, he won’t let it go. Fields of Thought is a brilliant accomplishment for a musician of any generation and to hear a cohesive piece of music to this extent is a privilege.


Download Fields of Thought for free at Retronym.co.uk by clicking here & grab the previous release Gander here. Several self releases and new projects are also housed over at his Soundcloud page.