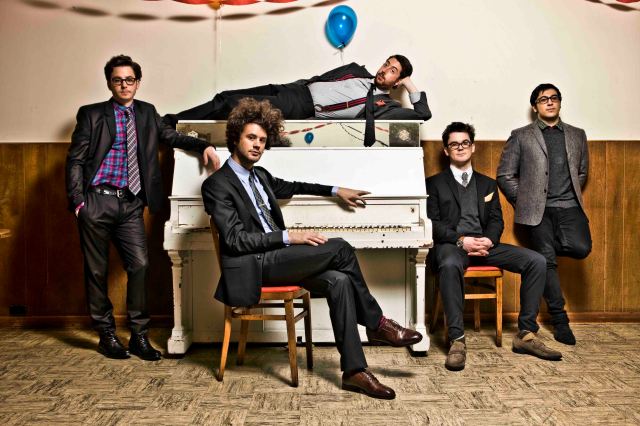 Last month was a doozy in terms of concert events. On June 5th, 2013, Metric played Mr. Smalls [2020k review] and the following day? Passion Pit and Cults at Stage AE.

Amanda And I waited in the rain, feeling like the oldest individuals in line. Apparently, Passion Pit has a lot of young fans. Initially on the lower level, the young attendees had security wondering why they took a job at Chuck E. Cheese for the night, often shining a flashlight in the direction of a rowdy individual. It was too much. We moved to the upper level before the opener hit the stage. Good thing too, as someone puked very close to where we were standing and cleared out a fifteenth of the area. We started calling that area the “playpen” with other attendees as the night went on. None of these are complaints, just observations. The target audience in the area shouldn’t surprise anyone, considering the optimistic instrumentals that accompany Michael Angelakos’ high-pitched vocals – however, it is the overall lyrical content that glues the band’s discography together that disguises it. In many ways, it is this masquerade that makes this collective brilliant. It’s real life inside song, the human mind personified into extremely polished, scatterbrained mixes – and it’s definitely presented in live fashion.

To see Angelakos is awe-inspiring. Recently presented with an Erasing The Stigma Leadership award for raising mental health awareness, Michael is an inspiration to anyone who has struggled to cope with any sort of illness (watch his speech; trust me). To see him flying around the stage, interacting with the audience, and delivering near perfect vocals while the band plays next-to-album perfect almost makes it all seem like it’s not real. How do the songs become so lifelike in a live setting? It shouldn’t work considering how many layers go into every single track (Michael has said that he often works within his digital-audio-workspace until it is impossible to insert anymore tracks), but it does! It works so well. Genuine emotion is felt through the entire set. Lifelike lights, a great background, and one song encore. This is definitely a show to catch.

New York indie-pop act Cults opened for Passion Pit, and delivered a great throwback set with visuals overlaying the band members and entire stage. Playing the majority of their small discography, their set was just as strong as the band they were opening for. Plagued with small issue of initial low gain on Brian Oblivion’s microphone, Madeline and company powered through their simple, mid-20th century inspired set. Before this show, Cults flew under the radar on this blog. After their performance? The vinyl was purchased and they are currently a blog favorite!

Cults Set:
Abducted
The Curse
Never Heal Myself
Bumper
Never Saw the Point
You Know What I Mean
Rave On
Go Outside
Walk at Night