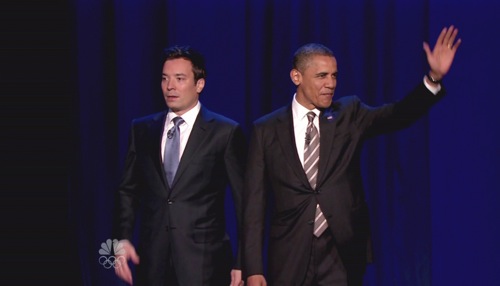 Okay, so this needs no explanation other than this: United States president Barack Obama schedules an appearance on Late Night With Jimmy Fallon. Then, proceeds to partake in a skit called “Slow Jam The News” with Jimmy Fallon and his backing band The Roots.

The song? A slow jam about the current fight to not raise interest rates on subsidized student loans for college students. All in favor of a Barack Obama record deal say oooohhhhh yeahhh…!

Look, occasionally we’ll Tweet something semi-political and either gain or lose a follower. Opinions will be opinions and you all have a right to your own. However, it’s impossible to deny that the always charismatic Obama reaching out to mainstream media in this manner is not only highly entertaining, but is also a great way to spread word in a light way about the happenings within the United States of America.

Put your opinions aside and enjoy the video below!

We’ll let you know when a lossless file is available. 😉

www.twenty20k.com
View all posts by 2020k | RJ Kozain →
This entry was posted in Sine Wave and tagged Barack Obama, Jimmy Fallon, Slow Jam The News, The Roots. Bookmark the permalink.