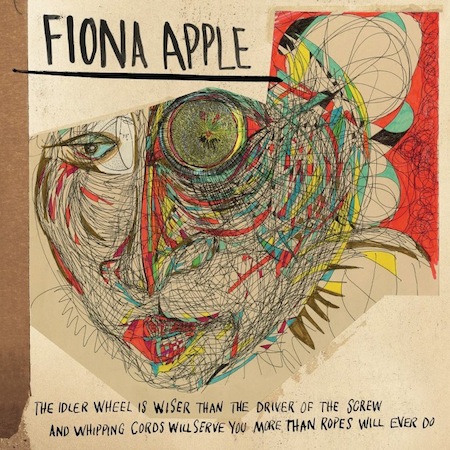 Today, Fiona Apple posted the album art to her fourth release The Idler Wheel… via her official Facebook page. It’s debut was set up along side a caption which announced the album’s release for June 26th, 2012 and a tracklisting, which you can view below:

Some things of note:

1. The full title is on the cover art, where as her sophomore record When The Pawn.. contained the words but were certainly not the main focus of the artwork.

2. If you don’t count the “Across The Universe” bonus track from When The Pawn…, it is tied up with Tidal as having the least amount of tracks on an album. It’s quality over quantity, right?

Judging from this artwork, we’re in for quite a ride.

You can view a beautiful rendition of “Anything We Want” via her SXSW 2012 performance via several YouTube uploads. “Valentine” has also been played live. But, it’s “Jonathan” we’re the most anxious for our ears to grab a listen to. Fiona writes perhaps the most darkly poetic pieces in regards to relationships, so we’re sure whoever Jonathan is… well he’s shaking in his boots right now.

In the meantime, we hope you all continued seeing Ms. Apple on her mini-tour. We’re crossing our fingers for a bigger performance schedule upon release of the record (with bigger arenas. We’re still bitter about scalpers being able to buy up all of the tickets within seconds).

Check back at 2020k for the latest news on the The Idler Wheel… and a review upon it’s released. It’s one of our most anticipated records of 2012!

www.twenty20k.com
View all posts by 2020k | RJ Kozain →
This entry was posted in Sine Wave and tagged Fiona Apple, The Idler Wheel. Bookmark the permalink.