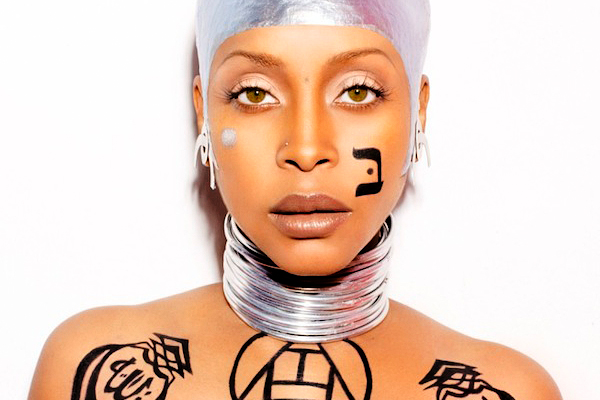 Neo-soul and R&B veteran Erykah Badu, who turned 41 years old on February 26th, 2012  has been picking fruit from quite a few apple trees lately.

A.) She’s been in collaboration with super group Rocket Juice and the Moon (which is comprised of Damon Albarn, Flea from The Red Hot Chili Peppers, and Tony Allen from Flea Kuti) on a track called “Hey Shooter” off their debut album. (Pitchfork Stream).

C.) Mark Ronson performed a new track called “A La Modeliste” with Zigaboo Modeliste & Dap Kings along side Erykah on The Late Show With David Letterman. (YouTube). It’s part of a free soundtrack download for the Regeneration Music Project documentary, which you can get by clicking here. (There’s even a remix!)

However, it’s the oldest news of the R&B gem teaming up with Warp Records artist Flying Lotus for her next record that really has us excited. The announcement was made on April 2011 and we’ve been giddy with anticipation ever since.

We know Erykah makes a lot of announcements that don’t follow through. Her New Amerykah series was originally slated to be released in three parts (Two CDs and a third album released via USB stick), however, the trilogy was eventually marketed as a two part series focusing on the left and right brain respectively. Every rapper in the world was supposed to be featured on “Jump Up in the Air and Stay There,” but after the track leaked on various upload outlets, only the version featuring Lil’ Wayne ever saw the light of day.

It’s nice to see an artist so artistically involved and willing to expand beyond her roots, right?

But, what’s Badu without a little controversy lately? Upon the release of 2010’s “Window Seat” video there became an ignorant uprising about the meaning behind the video in which the singer strips off her clothes to expose a concept called “Group think”.

Now, she’s under fire again. Erykah Badu’s show in Malaysia has reportedly been canceled by the Kuala Lumpur’s Culture, Arts and Heritage Ministry when a photo showing a tattoo she has of the Aarabic word “Allah” was published in the Malaysian newspaper The Star.

Originally excited. Her response to the cancellation can be seen on the official  @Fatbellybella Twitter account. “I deserve it.”

Pineapple Concerts’ managing director Razman Razali issued a statement and countdown on the promoters website saying “we’re working up until the eleventh hour to rectify the issues we’re facing. Erykah Badu and Pineapple Concerts will still like to proceed and we hope to have your continued support to bring on the show.”

We ask that you please keep an eye on the Pineapple Concerts website for developing details.