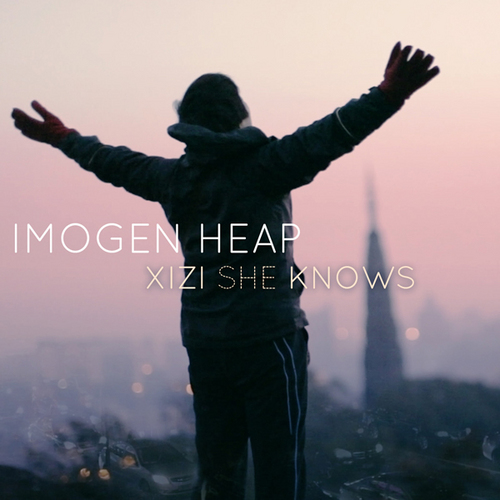 Track by track: Lifeline | Propeller Seeds | Minds Without Fear/Neglected Space | Xizi She Knows | Me The Machine| Telemiscommunications | You Know Where To Find Me

In keeping up with the forward-thinking marketing theme of writing, recording, mixing, mastering, and releasing one song every three months, for the next three years until her fourth solo record is complete, songstress Imogen Heap has released “Xizi She Knows”.

According to the #Heapsong5 website, Immi was invited to the city of Hangzhou, China by the Dushi Kuaibao local newspaper in collaboration with the British Council and the PRS as an artist’s residence to create a project of her choice. The end project? A track which compiles sounds recorded throughout a 24-hour period in Imogen’s (and her team’s) life in the country. These noises span from cars going underneath underpasses, to skateboarders practicing on the streets outside, to even incorporating various vocals of an individual doing yelling exercises on top of mountains.

In conjunction with recording these sounds, a video that featured activities and happenings around the city within a day’s period was also filmed and produced to coincide with Xizi’s release, just as the previous four songs had done.

These recorded sounds were mostly manipulated in some shape or form to make up the majority of the track’s melodic and rhythmic structure. They’re pitched down, sped up, and in some cases, reverberated tail-ends are used to create ethereal sounds that are added into the mix to create a densely layered track. It sounds signature Imogen, but at the same time, marks new territory by creating such a contorted sound scape that smudges the line between organic and electronic, therefore bringing forth a vision that’s quite astounding and even has flashes of experimental sounds you would possibly hear in moderation on some Aphex Twin records.

Lyrically? It’s wonderful abstract Heap. Full of adjectives and is an optimistic track that could melodically lie within the same reigns as “Daylight Robbery” off of her sophomore release Speak For Yourself. “Slow down friend of mine/In a terrible hurry for change/As you unravel your marvels from evergreen gardens/remember we love you this way” she proclaims wonderfully through the first chorus and playfully modifies her statement from chorus to chorus, creating an even more multi-dementional feel to the song.

As musically and lyrically great “Xizi She Knows” is, there’s something that falls extremely short in the mix and master of the track. The lows don’t knock, the high’s don’t shine, the mids don’t purposefully clarify the overall sonic picture, in fact, the end product seems rather dull.

It’s a bit of a shame too, because the engineering on this track is innovative. The pitch shifting, the chopping up of sounds, automation techniques, panning, delays, reverberation effects, and even the actual idea to use these recordings (which would otherwise have just been standard field recordings) to orchestrate such a huge role in creating the song itself all show signs of one hell of a creative mind, but where’s the kick?

We’ve spoken about this problem before and it seems to be an issue with Imogen records since the release of Ellipse. While the very subtle mixing techniques worked for quiet #Heapsongs like “Neglected Space” and the 3D song “Propeller Seeds,” it creates an off feeling for something of what would otherwise be something we’d be jamming out to our cars in at full volume.

In summary, this Xizi chick? She pretty much knows. She knows that through the critique of the track, it’s still pretty damn great as it is.

Editor’s note: We would warmly like to thank Imogen Heap’s studio manager Kelly Snook for her comment below on this entry in regards to the audio on the YouTube version of of “Xizi She Knows”. While this article pertains to the lossless audio file of the song, the YouTube audio may very well be presented in mono and should not be held accountable for in any loss of fidelity, as the file compression and mono signal does tend to alter the pure sonics of original mixes of any song quite drastically

We ask that you draw your own conclusions in regards to how the bundle mix sounds to you and remember that the recordings arts are respectfully subjective to the individual listener. We also ask that you share your opinion of the track in the comments section below or join the fellow iBabblers over at Imogen’s forum, where discussion of this track is just as elaborate as this article.

Purchase “Xizi She Knows” over at MusicGlue by clicking here.

www.twenty20k.com
View all posts by 2020k | RJ Kozain →
This entry was posted in track review and tagged #Heapsong5, Aphex Twin, Imogen Heap, Like No Other, Xizi She Knows. Bookmark the permalink.