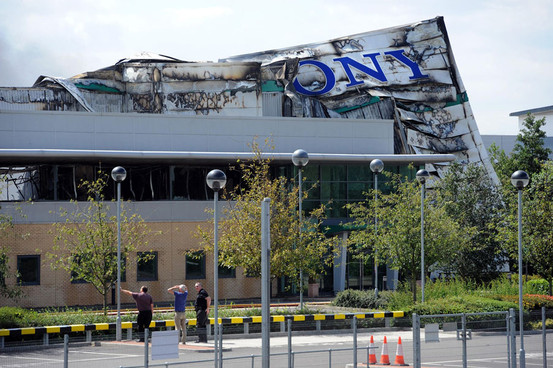 Over 100 record labels have been affected by an arson attack on the Sony DADC Warehouse, used by distribution company PIAS, with the Association for Independent Music confirming that all stock housed within the warehouse has been destroyed.

Mute, One Little Indian, 4AD, Domino, Warp, and Matador records were among the companies hit hardest by the arson, with Warp Records releasing a statement mourning the loss of their vast back catalog, fearing for the worst, and declaring that while they’ll try their best to replenish all that they can from different sources, it’s possible that some releases may never again be available to be physically purchased. Upcoming releases from the label’s CANT, Plaid, and Rustie were thankfully unharmed, however, most of the physical UK copies of  Battles‘ new single “My Machines” were destroyed in the flames. It will still see a release on Monday, with limited 12 inch vinyl available from the bleep.com website Nothing Bleep currently has stocked on hand was harmed.

The film industry has also been affected by this fire, but the outlook looks brighter in some cases with Network Releasing managing director Tim Beddows stating “Whilst the loss of stock (and mercifully only stock) is regrettable, I’m happy to reassure everyone that the interruption in supply will be short term and is the only aspect of the business affected” explained Managing Director Tim Beddows. “Whatever was lost that night is completely replaceable as we have asset backup for all our projects.”

Unfortunately, over 600,000 DVDs from distributor Guerilla Films have been lost.

So far, over 900 people have been arrested for the riots including two males, ages 17 & 18, who are alleged to be the ones responsible for the fire set to the Sony building.

PIAS and Independent company AIM have come together to establish a fund to help the labels affected by this extremely unfortunate event.