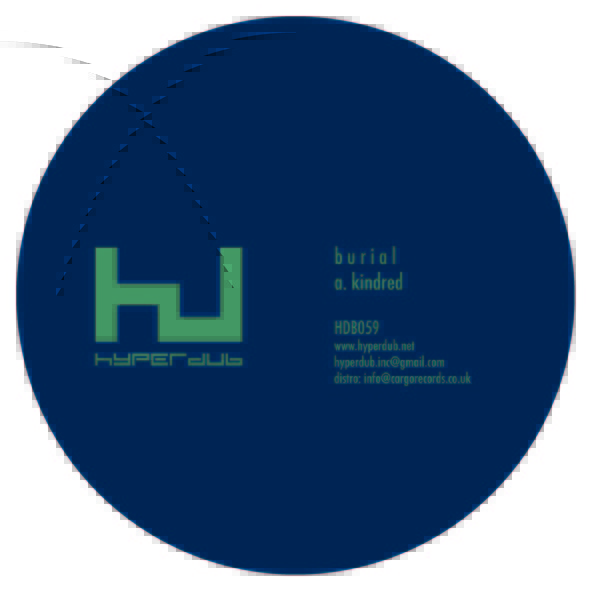 Around this time last year, Burial released his Street Halo EP (see our review here) to rave reviews. It was a short EP comprised of three tracks of average song length, doused in vinyl crackles, thunderstorm ambiance, and a progression of sounds that blended in well with his on growing discography. Afterward, in fall a strictly 1,000 limited vinyl release of a Massive Attack vs Burial song “Four Walls” (see our article here) forced itself into the atmosphere. Both releases received some critique for not having the best sound quality when translated to the vinyl format (side A of Street Halo received complaints of unwanted distortion compared to the digital release, as did Four Walls), but both contained a musical atmosphere that was signature, acceptable, and growing of the London based musician.

On February 15th, 2012, we got a taste of both of how the previously mentioned records would sound if they morphed together to form a soundscape all their own. The Kindred EP is an amalgamation of sorts in that it combines the long song lengths and slow progression that Four Walls/Paradise Circus offers, but also contains the sonically moody vinyl crackles and ambiguous vocal samples that make up a sound Burial is known all too well for.

Kindred’s final track “Astray Wasp” displays this combination by interpolating samples to create mini-mixes of two tracks from his 2008 Untrue album (“Endorphin” and “Shell of Light”) into the original song. The samples are kind of like sprinkling ashes, if you will, and give a semi-nostalgic feel of sorts to the EP’s ending. Beyond the samples, the track plays like a symphony as it’s eleven-plus minutes of music is split into several differing sections and moods that all blend together by a small drop in music, with ambient segues.

It’s the final four minutes of the entire Extended Play that are the most gripping. They start with a minimal four-four low frequency kick and the beat frantically skips around the time measure. This skipping actually confused fans into thinking Hyperdub’s label released flawed versions of digital tracks. The label quickly took to their Twitter to assure the listeners that the drops in the track are completely intentional (I can’t help but think of when customers were trying to return Madonna’s Music CD when they thought the guitar loop through the beginning of “Don’t Tell Me” was the disc skipping). Eventually, the peculiar cutouts cease and a delicate train track sounding percussion section chugs along an open-spaced piano-synth. Pulsing electronic static, and a minimal, glitched vocal sample that tempts the listener to “turn your body” (or something similar) enter as the euphoric layers fade into a drone, with blossoming reverberated chime effects and thunder that play the record out.

Backtracking through the EP, “Loner” let’s us know “there’s something out there” and begins with several eerie feedback-esque/distorted synth layers, with a whole note synth that stabs its way in and out of the mix. An ambient house beat, equipped with two different shakers panned to their respective sides of the stereo mix quickly throw themselves at the track, creating the dense mood. A sixteenth note, looped melody with a brilliantly lush and prominent reverb effect plays through each bar and progresses the overall house sound, before again, dropping out to reveal yet another minimal soundscape. The synth line appears again, in a muted form before unleashing it’s main fury upon the mix again and through the majority of the song. It’s claustrophobic sounding in theory – with the melodic line smothering and creating a restricted, paranoid emotion, and leading the way.

These mixed sections allow for the vocal samples to actually play more of an aiding role and it’s only once the electronic white noise abruptly makes its way in and out of the track that “Loner” strays far from it’s main direction. The final minute, however, changes everything and creates blissful musings out of a miniscule paradise consisting of one synth line and vocal sample that urges us to “hold On”. It illustrates fog, clouds, a visible gas and reaches a quick and effective climax.

Most of Kindred is panned down the middle with the exception of a few supporting sections of instrumentation and all of the background and field ambient effects. The rain and the crackle are constantly creating an atmosphere that’s more prominent than previous Burial releases and are used as a sort of main instrument in the mix. It’s as if Burial realized how much these sections of his songs effect the listener emotionally and decided to utilize them in a more forward based manner. It’s a technique that succeeds and helps paint a picture of empty London streets, or the after hours of a downward spiral during the late night club scene.

The title track, “Kindred” is where we see our partying reach it’s most intense. Standing at eleven-plus minutes, a diaphanous and floaty track introduction is quickly squashed before the first minute mark and an assaulting and commanding slew of woodblock, middle frequency range kicks, and rhythmic layered and looped synth line attacks. It’s one of the most disturbing and confrontational 2-step/garage based beginnings in Burial’s moderately sized discography and one that’s not to be ignored in any sort of fashion.

Interestingly enough, the fury is tamed with the integration of several flowing synths and several emotionally pitch shifted vocal samples that rival something that sounds like the vocal melody to Michael Jackson’s “You Are Not Alone”. (We highly doubt that this is the actual vocal sample, as a lot of editing would have to have been done to it).

The aspect of Kindred that makes this a flawless release is the movements that are featured in the title track and “Ashtray Wasp”. They’re almost split up in classical movement form, operating completely separately from it’s original build up, but yet incorporating a sense of natural progression from the ambient noise that allows the tracks to sound seamless and united.

Although we’re receiving music at a slow pace from Burial, we’ve been granted six tracks (eight, if you count the Massive Attack ones that we are still waiting to be available digitally) that absolutely show awesome artistic creativity and musical development.

There’s not much to say from an engineering standpoint on this EP or about Burial’s music in general because all of the techniques used are so gorgeously obscure and intricately executed that it’s impossible to even scratch the surface on how a certain sound was created, shaped, and formed. It’s perfection, it’s creative, and it’s heartbreakingly honest and emotional. While a full LP has yet to be announced, we’re anxiously twiddling our thumbs and headphone listening to the two released EPs on repeat. Well done.