Coldplay seem to have taken a leap while standing still on the band’s fifth record, Mylo Xyloto. It’s a little bit pop, it’s a little bit rock, but it’s infused in a way that provides an interesting cohesion of all of the records released by the band, while mixing in a more assertive manner almost as if determined to somehow find the link between combining the genres they cross and it’s done with an inclusively positive outcome on this release. Opening sales of 400,000 in the United States alone show that Coldplay’s artistic growth is still appealing enough to captivate audiences and take them along a ride toward the expansion of their catalog of music.

Mylo Xyloto’s opening track “Hurts Like Heaven” intertwines the overview and mood of complete record by incorporating an eclectic soundscape that both breathes the fresh, more pop sounding atmosphere presented throughout most of the disc, while maintaining the warm, layered and euphoric package Coldplay has been noted for since the release of 2002’s A Rush of Blood to the Head. A full production, comprised of the band’s signature melodically reverberated Electronic guitar leads, combined with acoustic guitars, a piano line, several Electronic glimmers, and an extremely aurally pleasing rhythmic section containing a surprisingly upbeat percussion section and a warm underlying bass presentation all make up the blood and guts of one of the album’s more memorable tracks. Frontman Chris Martin’s vocal production on this track is one of the more complicated and elaborate productions on the record as well with the most impressive aspect of their mix process being a Vocoder technique that assists certain sections of the song rather than giving it a cheap stand out gimmick. In the second verse, during one of the song’s more quiet moments, there is a vocal doubling technique used during the phrases “Yes, I feel a little bit nervous. Yes, I feel nervous and I cannot relax,” as well as additional harmonic layers that also embody a creative niche and come together with the aforementioned elements to allow “Hurts Like Heaven” to be one of the more comprehensive and astonishing uptempo works in Coldplay’s archive of released music.

It’s lines like the ones in “Hurts Like Heaven” that continue to leave outstanding marks upon the band’s career and there is absolutely no exception to any of the lyrical content on Mylo Xyloto. While the first single off the album “Every Tear Drop Is a Waterfall” (YouTube) interpolates a full melodic sample from “Ritmo De La Noche” by The Sacados & “I Go to Rio” by Peter Allen, it’s the sheer lyrical optimism of the Coldplay track that stands out and allows the sampled melody to take on a different form than what is presented in it’s original songs. “I’d rather be a comma than a full stop” sings Martin and as the song progresses with additional lines in the same vein as that one it’s a feel good arrangement that can be considered a chameleon amongst the Top 40 self-esteem boosters like “Firework” by Katy Perry or “Fuckin’ Perfect” by P!nk, digs in a different direction while presenting the subject in an Alternative Rock infused Pop track that comes across more dignified because of it’s cohesive and melodic song structure. Synthesizers and a four-to-the-floor kick are predominant throughout the bulk of the track that help aide Coldplay’s move into a more pop mood, but still contains influences from their origins that give way to a more clear focus and refreshing listen that all gels together to present a genuine product, as opposed to a quick pop track. 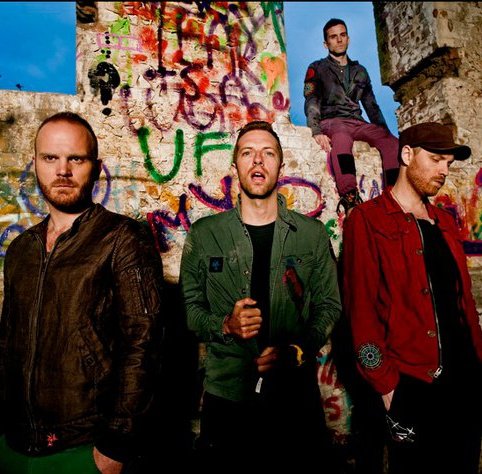 With “Every Tear Drop…” being such a Pop/Rock crossover success in terms of song structure and composition, it’s unfortunate that “Paradise,” (YouTube) the track’s third song and current single falls completely flat and comes off as almost too big of an undertaking when it comes to making music that’s more pop oriented. It’s an extremely compressed track, made up of an extreme pop structure and while strings and live instrumentation strive to keep the track afloat, if it weren’t for the sophisticated and more stripped down verses, mainly verse one with it’s combination of nicely put together piano line and percussion, it’d be a dud. The chorus consists of one phrase: “Para-para-paradise” and offers no track excitement, just an oversynthesized 8-measure count of one word being repeated over loud, clashing synth work. While it works for pop radio, it’s a track that’s structure hardly works and becomes overbearingly unstable, moving from extremely lush to extremely stripped down with no warnings and no rhyme for reasoning amongst it’s direction.

While we’re on the subject of pop music, did somebody say Rihanna? No? Okay..let’s move on then. Wait, what? Oh, Rihanna is actually on a Coldplay album?! No way!!! Really??! 2020k believes all of the violence and problems of the world started and continue in this day and age because of the mass confusion created by this collaboration. Anxious doesn’t even begin to describe the reactions fans and the blogosphere began to spew on the internet in regards to the announcement of this collaboration, but while the “We Found Love” singer is nowhere mentioned on the physical version of the track listing for the record, she is indeed featured and shinning on “Princess of China” (YouTube) and surprisingly, the track is undeniably gorgeous. Simple, sampled percussion instrumentation provides the basis for a heavy blanket of melodic instrumentation and equally lush vocal melodies that include the most hysterical girl on Twitter lamenting  “I could’ve been a princess, you’d be a king. I could’ve had a castle and wore a ring but no, you let me go”before launching into the somber and ironically catchy sounding “You stole my star, la la la la la la la..” In a world where these artists coming together to make a great song seems laughable, it’s pulled off and is easily the most repeatable track on the record.

Interestingly enough, there’s a production scar within the mentioned lines where it’s semi obvious there is some sort of crossfade technique gone wrong. During the first round of the castle line, there is a quick fade that almost sounds like a skip or a compressor trying to keep up with the changes within the tracks. It’s not a huge deal, it’s these glitches that sometimes make the Pro Tools Produced records sound humanized and even adds a little bit more excitement within the track with it’s unexpected turn. Also, within the lines, every time Rihanna says the word “I” it’s obviously cut and paste with a crossfade into the rest of the line. Her vocals were produced by someone not related to the Coldplay recording sessions (Kuk Harrell), so it’s possible the vocals were produced this way on purpose for the feeling of a more experimental, interestingly Glitchy and digitally grittier approach to Riri’s vocal styling. Regardless, flaws and all the track sounds great.

Outside of the pop productions, but still in the realm of new ground for the band, there are three shorter, interlude-esque tracks featured on the album that close one track and provide a mezzanine for us to cross into the next territory. It’s the first time the band has included these types of musical movements and are three short, atmospheric tracks that work well to give us an instrumentally cohesive feeling of traveling through the world of Mylo Xyloto.

These short tracks also give way to more Dynamic Range within the album. While the overall record scores an unimpressive DR7, it maintains it’s louder ground without distorting and has tracks like the shorter “A Hopeful Transmission” holding steady at a beautiful and pleasing DR12 (which is a number we hardly see in major releases).

Other pleasing tracks on Mylo.. include a throwback to the beginnings of the band’s career with “U.F.O.”, a more-so  acoustic recording containing stereo recorded acoustic guitars, beautifully stereo panned string arrangements, and Chris Martin providing a delicate vocal performance that needs no specific or complex mixing. “Us Against The World” is soundly one of the more U2 influenced tracks on the album, with gorgeous pads, delayed guitar mixing techniques, Reverb techniques on almost every channel within the song (some subtle, some forward) and falls in line with the other acoustic-tinged recordings of Coldplay’s career.

Best summed up, Mylo Xyloto is an overall evolution of a sound that’s been put together by Coldplay since the beginning of their careers. Starting acoustically and working to incorporate elation and aggressive pop overtones into their pieces of art. It’s not particularly breaking any new ground, but it’s evident that the Pop influences on the band flourish more on this record than their previous releases and creates a sonic counterbalance that’s appropriately appealing. A solid release.