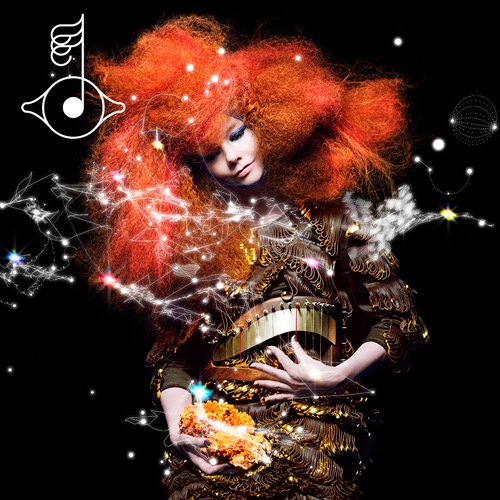 Biophilia brings a crossroads among Icelandic sensation Bjork’s fans: either stay in the semi-safe Electronic lands of “Hyperballad” or continue on the ever evolving Electronic/Organic hybrid, experimental and thought provoking recordings that Bjork has been slowly assembling and striving a bit closer toward with every new release.

On a surface level listening, Biophilia seemingly clings tight to it’s experimentation often sending the listener into spirals of strange time signatures, repetitious melodic content akin to Trance (if Trance was sedated 25 beats per minute slower and transformed into an overall more organic and more unpredictable form), and lyrical musings that are packaged together in an overly artistic disc that strikes as a bit overly ambitious. It’s a uniquely creative album could quite possibly be collecting dust on record store shelves, overlooked with a quick eye roll if it were to be released by an artist of any other name. In a world where we can so easily reach for the more universally renowned albums Post and Homogenic, relax to the micro-recording and detailed chill-out Vespertine, or half-and-half our way through the brilliantly composed vocal-only tracks of Medulla, it’s no wonder that this October released album has separated those who would rather blare the newly re-discovered “Army Of Me” (off Post and a Skunk Anansie Remix revival from the Suckerpunch soundtrack) out of the rolled down windows of their car, than the more rigorous and stripped recordings of those included on the loosely conceptual and unorthodox musings on Biophilia.

It’s a ride worth taking, but one that is disclaimed with caution and solicits patience. Any preconceived notions of the more Dance oriented, mainstream and accessible previous releases from the Icelandic artist but be void upon a first listen to Biophilia because of an overall departure of sound, a different approach to mixing, and a complete reinvention of the world that is Bjork. A world that is forever exploring different themes, different advances, and a world consisting of a consistent expansion and limit pushing forces that make up the risks that maintains an artist’s creative spark.

The best description and chief icebreaker into the world of Biophilia is the song featured heaviest in the early promotional period of the record, “Cosmogony,” which headlined as a song in the Solar System For iPad app and free app that comes compiled in the official Biophilia mother app (both available from the Apple App Store). Equipped with a brass section arranged by Bjork herself and transcribed for studio musicians by Matt Robertson (who played the overall musical director on Bjork’s Biophilia Tour) and an accompanying choir, it’s a smartly atmospheric and charmingly warm track that creates an optimistic and noble musical mood that goes hand in hand with the lyrical subject matter of The Music of Spheres (the thought that the celestial bodies have their own harmonic, mathematical, or religious bond – an inaudible musical relation of sorts). It’s composition is one of the more simplistic flowing tracks of the album and one that predictably plays with the coming and going of different instrumental elements within the realm of the track. Choirs and brass sometimes stand on their own, but also come together and develop harmonies with each other to bring a sense of a unified foundation between it all. Beautifully programmed beats by Bjork and Damian Taylor provide a rhythmic space to help bring a subtle lift and new-school feel throughout the song – bringing together a meaning of past and present coming together through the creation of the universe. 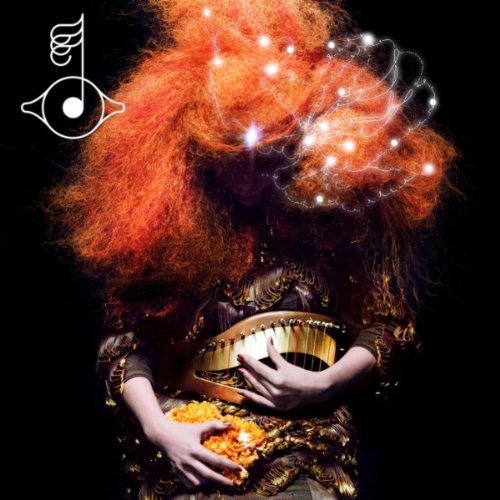 Another comfort ease into Biophilia’s core is the more lyrically emotional and socially relative “Virus”. It’s built  in the same way the majority of the album is created in that it’s an extremely complicated song structure, but generative in that it’s forever changing, comprised of a mostly 3/4 time signature, in D flat major made up mostly of sixteenth and eight notes, filled with quick rests during the middle of phrases and complicated melodic content that seems effortlessly and seamlessly simple when presented in it’s final aural form. A demonstrative feeling of the way love (whether un-reciprocated or sometimes, even reciprocated) can grab hold of another human being completely, becoming immersed within one another and creating an unhealthy environment where you become the virus that deteriorates the cell that holds the binds of love together. Eventually, the virus spreads out and takes over the entire body, in search of more hosts and is shown in an extremely clever, melodic way by having the custom built Gameleste immerse the entire mix by the tracks end and have a purposefully, overwhelmingly daunting, but beautifully broken down and cunningly crystalline appeal to it, creating the confusion and complications that love seems to have when delivering it’s burdens.

Speaking of crystalline, “Crystalline,” the lead single comes closest when hitting home with signature sound of organic and Electronic instrumentation Bjork has become known throughout her entire reign through the music industry thus far. The also gameleste makes it’s appearance throughout the entirety of this track and creates the perfect shining, metallic, and at times anxiously moody backdrop for the song that has a double meaning of structures, tunnels, bridges, and crystals themselves growing and coming to life, compared to the humanistic emotions of overcoming anxiety to let your true self be crystalline. “It’s the sparkle you become when you conquer anxiety,” Bjork sings over a mind blowing, sped up, Come To Daddy-esque Aphex Twin break-beat – which utilizes one of the most common drum breaks in all of recent musical history, the Amen break (watch an interesting and noteworthy 20 minute documentary on YouTube about it here). While the Serban Ghenea Mix version of the 16-bit produced track was reviewed on our website a few months ago, the album version ends with a few alterations to the song’s final break, and a lack of vocal manipulations on it’s final few phrases. Again, the record is going for a more organic feel and while the drums don’t pound nearly as hard in the mix on the album version of the track, it helps maintain the consistent Alternative and musically daring push Biophilia is made up of.

Part of the reason “Crystalline” doesn’t pump as hard as the Serban Ghenea mixed version of the track is because the overall compression of Biophilia is light. Instead, an extreme emphasis on fader riding when recording Bjork’s vocals is consistent and at times next to no compression was applied to her vocal tracks as a ways to preserve the outstanding dynamic range Bjork naturally has on her vocal performances. In fact, Damian Taylor, who mixed and recorded the bulk of Biophilia (a departure from world renowned mix engineer Mark “Spike” Stent whom has mixed Bjork records since Post) explained to Sonicscoop.com,“We wound up mixing the album together because Björk didn’t want to end up in a situation where her hands were off the project and someone else starts compressing stuff and changing the whole sound. It was a running joke that anytime I tried to do anything while we were mixing she’d whack me with a stick and tell me to turn it off. She was definitely trying to keep it as raw as possible.”

As raw as the album may be, it has it’s times where the record plays more timid than should be. “Hollow,” one of Bjork’s most atmospheric songs to date ironically sounds expressionless among the midst of a recording that sounds quite rhythmically classical in it’s purest sense. While it’s an obvious attempt at transcribing the song sonically just as well as it originated in it’s musical form, it falls flat and even suffers the wrath of a mix that relies on a significant amount on reverb to try and hollow-up the track. It’s an interesting attempt and one that is respected for it’s endeavor into trying, but would sound better if it were mixed in the same realms as the more ambient “Thunderbolt” or the even more atmospheric “Dark Matter” track – a song that features vocals which have no meaning to them, providing an eerie backing to a track that deals with dark matter itself and finds Bjork teaming up with long time production collaborator Mark Bell who has lent his mind to songs that display their message extremely properly (“Who Is It? (Carry My Joy on the Left, Carry My Pain on the Right) [Bell Choir Remix]” and Immature).

It’s the constant melodic sequences and complexities of them all that give this album it’s absolute musical charm and brilliant framework. It’s the opening track “Moon” that gives Biophilia an overall radiant and killer performance of all of the elements and fragments that went into the record. It’s repeated harp melodies that remain constant through the majority of the song, the scattered bass scraps and choir come together and form the foundation for one of Bjork’s best and most honest sounding vocal performances on record to date. Ranging from quiet whispers, to breathy phrases, and extremely eye opening, bone chilling, and breath taking full voice expressions, it’s an extremely strong and gleaming vocal delivery that more than makes up for that ugly low frequency, unwanted distortion that kicks in during one of the minimal breaks during the song.

There are also several other instances throughout the record where the album clips, most likely due to the source recording as opposed to a lack of care during the mixing and mastering process, which tend to go easy on Biophilia as a whole, save for “Sacrifice” which has a DR rating of 4 according to the TT Loudness Offline Scale.

Back to “Moon,” in the same line as “Crystalline,” “Moon’s” lyrical content is made up of a double meaning describing lunar eclipses and equating them to starting over or commencing a new beginning all together. “The best way to start anew is to fail miserably. Fail at loving and fail at giving. Fail at creating a flow then realing the whole and kick into the start hole.”

“To risk all is the end all and the beginning all” ends “Moon” and Bjork has definitely risked all on every album she’s released thus far, but she keeps defying the odds and unleashing outstanding new material from album, upon album, upon album, upon album. While they become conceptually harder to understand, sonically denser, and depart further and further from the pure Electronics, sometimes the best pills are the ones that are a bit harder to swallow at first. Or better yet, it’s best to take no pills at all and have this album hit you in it’s raw biological form that it’s meant to.