If you take Natalia Kills for just another 21st century pop star, you’re wrong. She’s been incredibly hard at work for the past two years putting together and promoting the songs that make up her debut record Perfectionist. The album itself has been put through countless track list changes, release date setbacks, and has been in a state of confusion and anticipation among fans, but it’s slowly starting to be released around the world, finally hitting iTunes and store shelves in America on August 16th, 2011.

First thing’s first, Perfectionist is executive produced by Will.I.Am of the Black Eyed Peas fame and Cherry Cherry Boom Boom Records president Martin Kierszenbaum. They’ve enlisted Rob Orton to mix the majority of the record (there’s a cool article on his approach to mixing “Just Dance” here) and mastering engineer Gene Frimaldi  (all three Lady Gaga albums, How I Do by Res, and Jason Derulo’s debut) so an extreme pop presence is felt throughout it’s entirety. There’s a subtle feeling of loudness and an urge to place vocals, kick, and snare at the forefront of the mix at almost all times, but accidental clipping isn’t much of an issue (whereas Gaga’s Born This Way is sometimes questionable,) so while the album is somewhat ear grabbing and tiring after a few listens, there’s still a tiny bit of breathing space amongst the bit of headroom left within the record.

It’s not just a pop record though, it’s dark pop and “Zombie,” the album’s buzz single, released in September 2010, is the finest example of using mainstream pop elements, warping them, and creating an almost paranormal sounding sound scape. It’s the only track not mixed by Rob Orton, instead, having the final mix of the track done by “Zombie”‘s producer, Jeff Bhasker and it shows. This track, one of the finest productions as a whole on the record, giving a lot more emphasis on muddying the lower frequencies and creating an almost horror-esque sounding track. Interestingly enough, the track is heavily autotuned, but instead of being annoyingly perfect and on pitch, it’s settings are used to be a bit awry sounding, giving Ms. Kills an eerie, haunting and creative vocal vibe. Behind it, vocal pitches, backwards reverbs, 1/4th note stereo delays, and various distortion effects are also used abundantly throughout the track. A chilling track for sure.

In complete contrast to “Zombie,” Bhasker’s only other offering on Perfectionist, “Free,” demonstrates a less layered, more straightforward approach to production. Standard sampled percussion samples drive the synth bass driven, piano line aided track. The vocals are, for the most part, very dry and in your face, with splashes of reverbed delay on the word “free” in the chorus, and a slapback-esque delay to add some kick to “Stretch that dollar bill, stretch that dollar bill” line. The United States release throws Will.I.Am. on one verse, repeated throughout the song. The thing that makes his delivery interesting is that the first time the verse presents itself in the song, it’s used more or less as an opening rap. As the track progresses, it once again makes an appearance, this time, providing a bridge between Natalia’s “get your 5’s, get your 10’s, get your 50’s out” break, and her distorted high frequency verse that follows Will’s low frequency, stereo spread vocals. A complete contrast in all senses and extreme creativity in how the song’s structure goes about it’s business.

Lyrically, “Free” is one of the more sophisticated offerings on Perfectionist. Words that allow Natalia to switch from being self-indulgent and greedy in spending & consuming, then becoming free from that greed/self-indulgence because of all of the spending she’s done. Stretching those dollar bills and those multi-meaning lines one by one, using catchy pop melodies, referencing stilettos, anorexic wallets, late rent payments, and morphing them into sophisticated phrasing? That’s clever pop!

“Wonderland,” the album’s second single, produced by “The Ron” Feemster is Perfectionist’s opener and holds a nice neutral theme from the ultra dark and simple extremes that Natalia Kills offers throughout the debut. Very synth and percussion heavy, subtle melodies, and stereo spread vocal effects on the ending of verse phrasing. The only problem with “Wonderland” and a few other tracks is that the instrument melodies are sometimes buried within the loudness and over-emphasis on vocals and kick/snare. It’s not a huge problem, but it’s quite difficult to hear and get into the siren-esque synths that lies underneath both verses, and tick-tock sounding guitar strum that’s present throughout the entirety of the track.

Also, there’s a stuttered scream during the video version of this song that comes in right after the breakdown that’s not present on the album version of the song. It’s obvious that it was added in specifically for the video presentation, for added dramatics, but it sounds awesome when paired up for the high pitched synth, right before the chorus kicks in and could’ve been a great effect to be presented front and forward on the record.

Beyond the complications, the vocal production is absolutely wonderful on this record (save for a few moments where small autotune glitches are heard within Natalia’s voice) and  there are brief moments in “If I Was God” where Natalia switches from singing to speaking lines which sound quite lovely. As far as overall production, delivery, and melodic presence, lyrical substance, and straight forward emotional pop this track is the stand out and is one that’s easy on the ears, great sounding, and one for the repeat button. 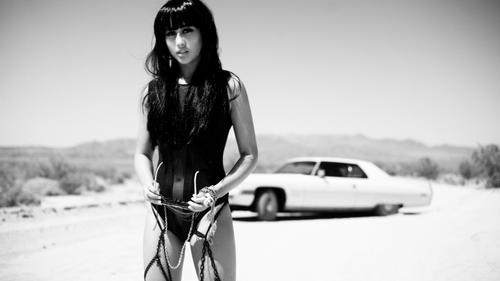 Outside of the record and from a marketing standpoint, 6 tracks are missing from the physical release of the CD. “Kill My Boyfriend,” the new track specifically included on Perfectionist for the United States release is only available on the iTunes deluxe edition. Also only available digitally is the album’s wonderful introduction track, a mere 33 second piece titled “Perfection,” an experimental and atmospheric monologue (..really, Cherrytree? What’s the sense in cutting the intro and providing it for $1.29?)

However, the biggest WTF is the absence of “Activate My Heart,” which was a United States iTunes released single, equipped with a video, and is not featured on any of the releases of Natalia’s debut record. Perhaps these are tactics aimed at fans reaching out to purchase multiple copies of the record. After all, it’s hard out there for a new artist. Especially one that has a record that could fit in right beside Rihanna’s dark, depression heavy Rated R, which was almost a pop failure if it weren’t for the saving single “Rude Boy,” which breathed a bit of life into the chart run of the singles and record itself.

Despite it’s mishaps, Natalia Kills delivered one hell of a first record, a slew of great videos, a lovely series called “Love Kills” (which you can view on her VEVO account via YouTube) and continues to impress audiences with her acoustic performances and impressive work ethic. It’s a career that looks long and promising if she continues down the road she’s heading in, and 2020k looks forward to following her through her path.

What do you think about Natalia Kills’ Perfectionist? Is it the flawless debut you’d wished and hoped for? Let us know in the comments section! Also, follow us on Twitter and Facebook for the latest on Natalia and more!