Kelly Rowland seems to be having quite an identity crisis for an album ironically titled and just released Here I Am. In 2010, we received videos for the more dance oriented “Forever And A Day“, “Rose Colored Glasses“, and “Commander“. The songs seemed to try and capitalize off the international success of her collaboration with David Guetta on “When Love Takes Over,” released on his debut album One Love. They went nowhere in the United States but found success in the same places where the Guetta song took off, so it explains why the UK and many other countries are receiving a COMPLETELY DIFFERENT version of the album, with “leftovers” from the Here I Am recording sessions and a few of the songs that are currently featured on the United States release. It’s one of the many marketing strategies Kelly’s team has set up to ensure multiple copies of the album are purchased by diehard fans and is just the tip of the iceberg of the “WTF” worthy mistakes Here I Am is made up of.

The truth is, it’s hard for dance music to make it’s way onto Mainstream top 40 radio in the states and Kelly Rowland albums always seem to try to maintain a healthy medium of nice pop friendly, urban hits with more solid album cuts. A bit of a compromise, yes, but as an artist that is constantly and unfairly compared to her Destiny’s Child group mate Beyonce, it’s a sacrifice she’s been giving for years to keep up with the spotlight, while allowing herself a little niche to give us a more interesting and contemporary R&B style with songs like “Flashback” off of her sophomore release Ms. Kelly and “Train on a Track” from her debut Simply Deep.

Unfortunately, and probably because of the clusterfuck of failure that the dance tracks received domestically, we do not have any tracks on the record that do not come across as copycat and try-hard. For instance, On the album’s opening track “I’m Dat Chick,” we find Rowland delivering lines full of the hard hitting, independent female anthem lyrics, and giving us full swag on the lines “how you know? I told you so” but the delivery throughout the verses and the bulk of the song are extremely reminiscent of The Pussycat Dolls‘ sinister shouted verses and playful “ha-ha-ha-ha” on their single “When I Grow Up“.

Kanye West also did the electronic boops on his “Say You Will” from 808’s and Heartbreaks that are featured on Kelly’s “Keep it Between us” and “Leggo” has become a trademark of Chris Brown on “Look at Me Now,” not Lil’ Playy on “Work It Man.” The bulk of the album also noticeably sounds like something her contemporary Wynter Gordon, who does a nice job at fusing dance and R&B music together, would try to release. Kelly’s copycat aspects of her tracks are extremely noticeable, but doesn’t mean that they’re all completely horrible.

The overall rap on “Work It Man” is great (“girl, I swear we go together..X and O’s. These other niggas, they can leave..exit doors” Playy playfully spits)  and the track in general is actually one of the more standout tracks on the record, with lyrics that don’t reference the all too cliche club fifty times and mention that she’s sippin’ till she’s empty. Instead, it’s a song about finding a man who’s going to kind of work it for you in all sorts of ways.

But still, “Work It Man” and rest of the record falls short because of entire-track quantization, simplified chord progressions, and focus on the bass being as big as possible to make up for it. They’re tracks that go a bit harder and as a result, the rappers featured on the album normally sound a lot better on the tracks than Kelly Rowland herself. It’s part in fact that the percussive aspects of the tracks work well against the rhythmic flow of the rappers, but also because they had more creative freedom to say what they wanted to say on the tracks, allowing for more creativity, and also because their vocals aren’t nearly as compressed as Rowland’s.

The biggest crime of the entire record is that throughout all of the un-melodic sample based, VST synth usage, cheap keyboard/piano sounds, and weird ur

ban/dance combinations that Here I Am provides, the dynamic range of the tracks are crushed to a motherfucking pulp, with Kelly Rowland’s vocals pushed to the forefront of the mix throughout the entire record. She’s so compressed through the album’s run that you can barely tell where she’s attempting to give a quieter performance and instead her vocals run steady and loud through each and every syllable that she poured into the microphone.

As a matter of fact, her vocals are so prominent that I can set the CD at a moderate level on my stereo (or hell, even my mac speakers) walk out of my room to any room in the house and can still understand and hear every single word that’s being sung throughout the record. There’s a difference between compressing to add focus and compressing to obviously try to make an artist’s vocals stand out amongst the rest of the competition. A prime example of the loudness wars.

In addition to loud vocals, there are certain artists who have such beautiful tones and talent the use Autotune for any reason at all shouldn’t even be considered (Mary J. Blige, you’re The One I’m looking at). Kelly Rowland falls into this category and for whatever reason, these artists still rely on it. So, in order to keep the theme of “Urban Dance” that Here I Am offers, Kelly is autotuned to robotic steel throughout the album’s run and obnoxiously so. Even on the slower tracks that are placed on the album for demonstration purposes of emotion and vocal talent like “Heaven & Earth” (Deluxe Edition release only) are demolished and ruined by the combination of over-compression and extreme usage of vocal effects and autotune. 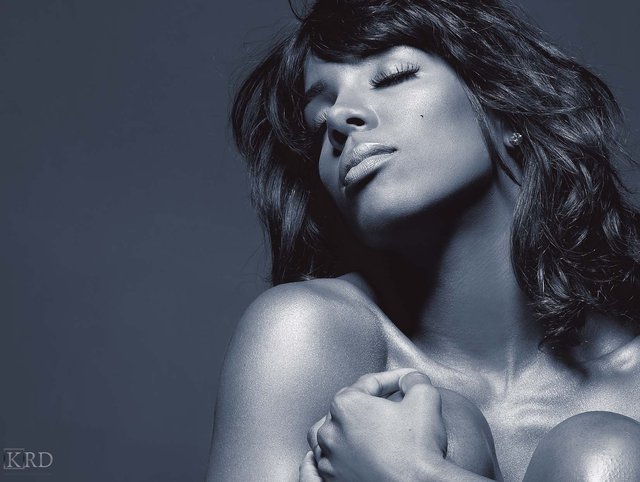 Throughout all of the misfortunes, none of which are particularly Kelly Rowland’s fault, (more so the album’s engineers, due to pressure from her record label) there are a few sparkling gems beside “Work It Man” that make this record worth buying. The album’s lead single “Motivation (Featuring Lil’ Wayne)” provides some of the most straightforward and sexiest lyrics of this year, with Rowland letting us know “And when we’re done I don’t wanna feel my legs. And when we’re done I just wanna feel your hands all over me, baby” against a Jim Jonsin and Rico Love beat.

Rico Love also continues to bring out the best in Kelly on “Feelin’ Me Right Now,” another one of the album’s independent anthems. Although it’s another track about being in the club, the album’s bridge gives way to some confident lyrics. “So back, back, back it up. You’re the one I got my eye on. Don’t give me your number, it’s already in my iPhone. I just want you close, close, close, close, nearer. Been watching you all night up in the mirror. I’m just feelin’ me right now.”

For the most part, save for a few songs here and there, it’s a mind numbing experience of poor engineering, bad marketing, and formulated-throwaway R&B/Dance fusion. Here I Am does it’s job in that the next time some guy calls you ugly, you can remember “I’m Dat Chick” and tell him “they tell me I’m so fly, I’m so fly, I’m so fly. But I don’t need a mirror, I can see, see, see, see” because even though this album is a bummer, Kelly will still break your fist, she’s dat chick.

Worth it tracks: Work It Man, Motivation, Turn It Up, Feelin’ Me Right Now, Commander, I’m Dat Chick

2 Responses to Album Review: Kelly Rowland – Here I Am