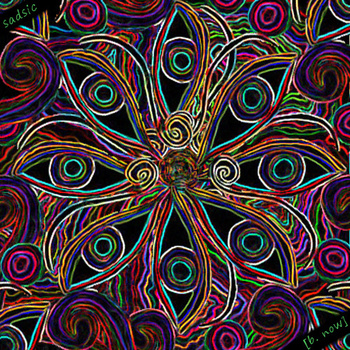 There is an experimental Electronic musician that’s been around since 2006, based out of Florida/Maryland called Sadsic that I’ve literally been introduced to this morning and he’s very, very good. His newly released EP [b. now] is a short 26 minute journey of music that takes you through the valleys of optimistic sounding synths, vocals, and samples that come together to bring you a great combination of Trip-Hop, Chill out, and even little dashes of Alternative Hip-Hop.

The album’s opener, “Tango Down” begins with two different samples spelling out what you’re about to listen to: Sad. Sic. Sad. Sic. Sad. Sic. Sad. Sic. It’s an interesting twist in introducing yourself on record the way emcees often hype themselves up (think “This is a Missy Elliott one time exclusive..” her catch phrase throughout most of the Under Construction era, but better). The sample is repeated a million times in it, but blends so well with the organized chaos, including string and horn samples and sonics that are reminiscent of viral Chillout artist Pogo‘s work that it doesn’t get tiring or overrated by the end of the song’s run. There is also an interesting parallel compression technique (or perhaps just manipulation with the sample’s envelope) used on the outro of the song that provides a bridge into the last 38 seconds of the morphing track.

Track 2, “Alone”, sounds like a lovechild between Mono and Terranova with Sadsic creating a musical soundscape of record hissing, choir-oohing, hard knocking percussion and supportive samples that create layers and layers of dense sound, providing the foundation for the several melodic aspects of the track that play off of the stereo image to add added chill and trip. The most impressive parts of this song comes from all of the attention to detail in the production of the vocal, a rap provided by Jstjr. They’re doubled and panned in some parts, several reverbs are added and manipulated throughout the 4:44 run and it’s sometimes chopped up, delayed, and reversed through the bulk of the track. (This also holds true for “Homesick Mountain” with vocalist Willie Versteeg).

Though there’s extreme praise for “Alone,” it and most of the other tracks on [b. now] focuses a bit too heavily on ensuring the kick & low frequency aspects of the songs have a lot of high energy, which sometimes can be a distraction to the other loops, samples, and instrumentation going on. It’s one of the only downfalls on the EP, but the consistency of trying to use a lot of something is heard throughout it and on several other aspects of the record, including the beautiful and emotional Boards of Canada sounding “2 + 2 = 22” in which an effect is used to distort a synth on several aspects of the song. While the idea of using distortion to give the the loop-esque sound that’s created an extra punch is great, however the setting, which sounds like an extreme EQ boost in the high frequencies, with some intentional clipping and a compressor so it’s not actually distorting the track, is a bit too extreme and is mildly grating on the over all sound of the song.

All in all, it’s an EP that obviously draws from it’s influences, but comes off sounding genuine and fantastic sounding for an unsigned artist. You can download it for free or at your own price through Sadsic’s Bandcamp website. We recommend throwing in a few dollars, because it’s worth it. Click here to stream the record and/or download/buy it. Then, leave a comment on what you think of this record! Sadsic’s awesome! Especially all of the amazing panning and play with the stereo sound that he does! We want to hear more!

Got an unsigned or indie artist you’d like us to take a listen to? We love exposing talent and expanding our musical knowledge of the underground scenes on 2020k! Shoot us an E-mail, send us a wall post on our Facebook page, or Tweet us what you think we should be writing about.