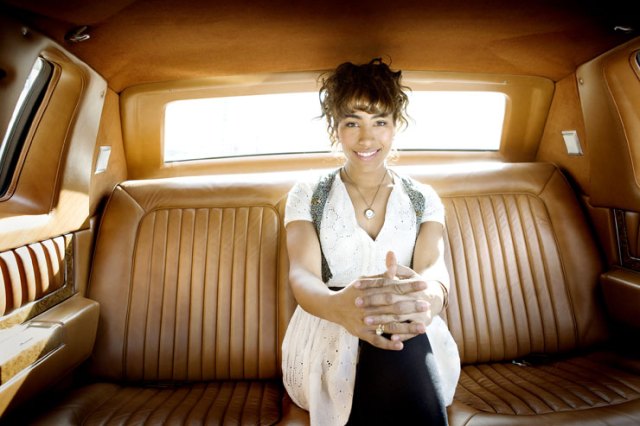 2020k is proud to present it’s very first exclusive interview on it’s website ever! …With Nikki Jean! Her debut record Pennies in a Jar (which we reviewed upon it’s release, click here to take a gander) has made quite a splash since it’s release last week and we’re proud to give 2020k readers and Nikki fans some insight into the record, her feelings on her unique bond with her followers, and some information on what we can expect in the near future (hint: it includes videos and Patty Crash)!

In conjunction with our feature interview, we will also be running a contest in the next few days to give away a couple copies of Pennies in a Jar! If you’d like to find out how you can win your copy, be sure to like us on Facebook and/or follow us on Twitter! But, for now, take a read below to find out Nikki’s thoughts on her David Letterman performance, taking over Lupe Fiasco’s Twitter, and more!

First and foremost: Hello, how are you?!

You sounded & looked flawless on your Letterman gig and performed “How to Unring a Bell,” which is my favorite from the record! Your whole band looked like they were having loads of fun as well. How was that experience?

The Letterman show was an ENORMOUS opportunity. The guys and I practiced a lot to prepare for it, but when we got there the staff at the show were so amazing that it was easy to relax and have fun.

What was the motive behind your ambition to travel across the United States, track down various legendary songwriters, and strive to create the 21st century’s answer to Carole King’s “Tapestry”?

I was completely inspired by the songs I loved as a little kid, and also what I perceive to be a downward spiral of song quality in popular music. The melodic vocabulary of the average listener has shrunk so much. There’s no problem with the music of today, the challenge is to create a space for a counterbalance. So that’s what I wanted my statement to be. Also, I couldn’t pass up the opportunity to learn from the greats.

Have you gone to the record store to pick up a copy of your record yet? How does it feel to finally be able to hold the album in your hand and say “This is mine. I made this!”?

Not YET!! I’m not entirely sure which stores have the record and I don’t want to walk in and be disappointed, but I know we’re shipping a lot of them soon, and then I’ll go for sure. 🙂

What’s your favorite song on the album and why?

I love “China” – It’s both my favorite song to record and to listen to. When we went into the studio to record the vocal on that song, it was kind of a magical day. Everything just fell into place and it was really joyful. When we finished everyone was like “yeah . . that was . special”. When I listen to the record I always remember that so it makes me smile and it’s a song that says something about the world, which is important to me.

Since having a YouTube account, you’ve used other social media platforms such as Formspring and Tumblr to keep a tight connection between you and your fan base. How important is it to you to have that connection?

It is very important. Musicians need music lovers. It’s that simple. I’ve been fortunate to have a unique and close relationship with many of my youtube viewers. They have been such a source of inspiration and strength throughout this journey. My goal is for there to be no artificial barriers between the music and the people who’s lives it is mean to touch.

How is it interacting with all of the Lupe Fiasco fans now that he’s temporarily quit Twitter and handed the reigns of his account over to you? Has anyone said anything crazy yet?!

The brilliance of Lupe allowing me to tweet from his page is that he shared access one of his most valuable assets. . his PEOPLE.  They’ve been very kind for the most part and open minded considering I was thrust upon them involuntarily. I love the power and thoughtfulness of Lupe’s fans. It was an amazing experience.

Speaking of Lupe, “Hip-Hop Saved My Life” was a huge opportunity for you. What was it like for him to return the favor and spit a verse over “Million Star Motel” along with Black Thought from The Roots?

Lupe Fiasco and Black Thought are two of the most thoughtful lyricists ever to hold a mic. I am inspired by their lyrics and to have either of them on a song would be an honor, but to have them both really blows my mind. It’s a treat for me as a fan, and hopefully also for their fans.

Previously, you graciously released two EP’s with your band Nouveau Riche for free through file hosting websites. Fortunately, your solo debut didn’t have a chance to leak to the same websites before it’s release, but the tracks have inevitably begun to spring up on various other outlets. Do you have a take on file sharing? Has it helped or hurt the industry? You?

I have given, and will continue to give away a lot of music. With that in mind, when I FINALLY release something, of course you wish people would purchase it. If they don’t, and they appreciate the music, I hope they come to a show, or buy a t-shirt or in other way show their support. At this point, file sharing can’t be helped, so attaching emotion to it good or bad is pointless. It’s like. . Sometimes it rains. . It’s just a fact.

What albums and artists have you currently been listening to?

I’m currently listening to Ellie Goulding, and this new mixtape that 88 keys is putting out. There’s some really amazing unknown lyricists on it.  I also, of course, am always listening to Elevator Fight, and J*Davey.

The most adorable song on the record has got to be “Patty Crash”. Considering you two are best friends I’m going to assume she’s heard the song, so what’s she think of the track!?

It’s such a complimentary song that I would be totally bummed if she hated it. But she seems to like it 🙂 We’re making a video for it . . starring. . PATTY CRASH!

You’ve opened up for Train, was featured on the Glow in the Dark tour, and even basically toured through people’s living rooms. Are there any plans to do more touring in the recent future? Are there any shows coming up?

We are currently in the process of trying to fill up my schedule with shows as much as possible. I’ll have more information soon. . sit tight.

In the same vein of planning, what can we expect in terms of promotion for “Pennies in a Jar”?  Music video? Future single releases? Radio and TV interviews? Etc.?

We’ve been doing a lot of radio promotion on NPR which is amazing. In addition to Letterman, we also just finished taping Tavis Smiley, which I’m thrilled about. I’m planning 4 videos for the album right now. . but I look at the promotion of the record more as a journey than a destination and look forward to rolling them out over the next year.

You mentioned several times about “The Complete Artist’s Way” and Morning Pages. Can you expand a little bit more on how those helped you and if you have any other certain processes or rituals when it comes to songwriting?

Morning pages are a practice I started doing 10 years ago. It helps me connect to what I consider to be my inner wisdom. At the end of the day, we all have a gut feeling about what we SHOULD be doing with our life, or the right or wrong decision in any given situation, morning pages help me identify those. I try and look at the world around me with an eye for detail and the relationships between seemingly unrelated things when songwriting. . Things that make me wonder about the world and our place in it.

In the years leading up to the release of “Pennies in a Jar” and through all the ups and downs of working toward putting it together, what would you say is the biggest lesson you’ve learned & kept with you? And what advice can you give to other aspiring artists (or people with ambition to follow their passion in general)?

I don’t think that a career in music is something that should ever be encouraged.  I think a professional music career is for people who are so passionate and hard headed that no matter how much discouragement is hurled their way they fight through it. If you want security, a retirement plan, health insurance, the ability to care for your parents as they age, the ability to have kids, and buy a house in a timely or predictable manner. . IF ever. . make music your hobby, not your career.

Do you have any announcements, closing comments or statements in general that you’d like to throw out into the world to the readers of 2020k?

I would like to thank the amazing people who have helped and supported me along the way.  I hope you always believe in yourself, the way I believe in you.

2020k would like to thank Nikki Jean for taking time out of her schedule to take the time to talk with us! Her debut record Pennies in a Jar was released on July 12th, 2011 under S-Curve Records. Click here to download it from iTunes! Leave a comment below to let us know your thoughts on this piece!

5 Responses to 2020k Presents: An interview with Nikki Jean!