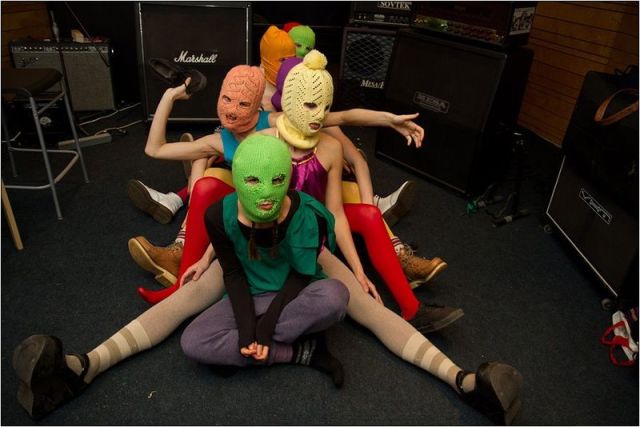 Pussy Riot is something I’ve come to the defense of since the beginning of it’s ascent into international discussion. This isn’t just a group of girls coming together as a means to promote hooliganism or spread any sort of religious intolerance, but a provocation of thought. Their use of punk music and unsatisfactory musicianship contribute toward their political activism, combined with promotion of speech freedom is brutally honest and unapologetically bold.

CBS News aired a 60 Minutes segment on the aftermath of the Pussy Riot trials, in which three of the members stood up against a harsh, public legal battle surrounding their performance at Moscow’s largest cathedral. The defense ultimately lost. Two members of the collective are still in captivity, working in labor camps while others are in hiding, and one member chooses to speak freely, without blanketing herself, to Lesley Stahl.

At a performance I did at Rex Theater in Pittsburgh, PA back in 2012, I performed a slightly altered version of my Britney Spears Vs. Trent Reznor & Atticus Ross “Piece of Me” Ambient Remix [Stream & free download by clicking here]. It was prefaced as a political statement and social commentary on the exploitation of the entertainment business, as well as the voice that can be heard throughout it. The most conscious decision was to combine “Painted Sun in Abstract” with the vocal track to “Piece of Me” for the duration of the first two verses and chorus, but take out Britney’s highly compressed and processed vocals and replace them with my own live voice. It was unpracticed, except for once, and was a move calculated to demonstrate the humanity behind the music. The man behind the machine, the band behind the movement. The result? Imperfect, raw. Just the way I wanted it. [You can see the end result by clicking here].

Pussy Riot is an extremely pertinent commentary on the social stigma of speaking out, a political movement smartly aimed at freedom of expression, a feminist declaration, form of peaceful protest, and much more. The Russian government can attempt to stop them, but their efforts will and are presently backfiring on them. Whether this band of women are able to accomplish a movement powerful enough to achieve all of their initial plans is for the future to know, but what they’ve accomplished so far and will continue to consummate has far exceeded what was thought to be a force weak enough to be stopped.

No matter what these girls do from here on out, their moves will be watched, documented, and archived.