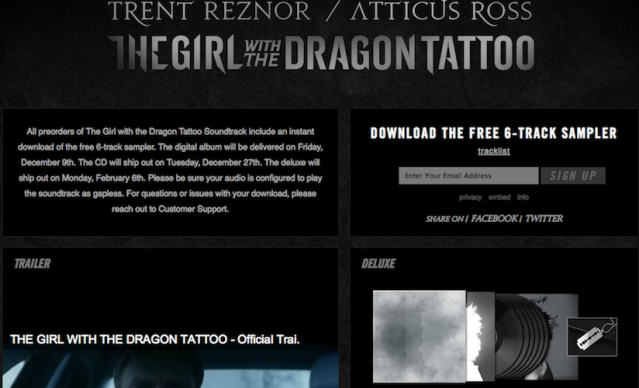 Update: There seems to be a lot of traffic coming to this page on Thanksgiving 2012! Thank you very much for choosing 2020k. Check out our articles on the new How To Destroy Angels EP and Call of Duty: Black Ops II theme song by Trent Reznor as well!

Two days ago, we put up a blog entry elaborating on a tweet Nine Inch Nails’ mastermind Trent Reznor put up about working with Neil Kellerhouse and art director Rob Sheridan on the artwork to the six vinyl package of The Girl With The Dragon Tattoo Soundtrack, a score in collaboration with long term musical partner Atticus Ross. Today, we learn that the mini-site launch for the soundtrack has gone live and pre-orders are being taken in a variety of formats for the record.

Noticeably absent is the option to buy the soundtrack on Bluray this time around, whereas it was offered and is still being offered as a purchase option on their previous (and debut) movie scoring effort for David Fincher’s The Social Network. The bluray option offered lossless stereo and 5.1 surround sound versions of the tracks, but when asked by @hastily on twitter why it wasn’t a choice this time around, @Trent_Reznor responded with “long story..” We’re sure three hours worth of music would have been hard to put together in a surround sound format, so perhaps there just wasn’t enough time?

Then again, on NIN.com, a small blurp from the guys quote “For the last fourteen months Atticus and I have been hard at work on David Fincher’s “The Girl With The Dragon Tattoo”. We laughed, we cried, we lost our minds and in the process made some of the most beautiful and disturbing music of our careers.” However, when scoring a film, a lot of work goes into creating the mood and sending tracks to and from the director and audio/musical supervisors, so it’s safe to stick with the story of there wasn’t enough time.

“The result is a sprawling three-hour opus that I am happy to announce is available for pre-order right now for as low as $11.99. The full release will be available in one week – December 9th..” continues the press release and upon visiting the Null Corporation website for the soundtrack, you’ll find a variety of prices and choices to pick from.

The $11.99 option is actually an iTunes pre-order, not affiliated with the Null website and upon purchasing the soundtrack from the Apple program, you receive an instant free download of Trent & Atticus’ cover of Led Zeppelin’s “Immigrant Song” with vocals from Yeah Yeah Yeah’s front woman Karen O.

Instant downloads are a great thing and if you’re not ready to purchase the soundtrack just yet, there’s a FREE six song, thirty minute plus sampler download on the soundtrack website. When 2020k tells you that regardless of whether you’re going to purchase the soundtrack or not, that you NEED to download this sampler…you NEED to download this sampler. This is some of the best mixing, best use of stereo imaging, and some of the most The Fragile-esque production from Reznor & Ross that’s been heard in a very long time. The ambient soundscapes are dense, nervously anxious, frightening, and will make the hair on your arms actually stand up. It’s no surprise though, this duo knows how to make music and make it well.

Oh, and the six vinyl set? Only 3,000 have been pressed. Each signed by Trent and Atticus and contain several bonuses, featuring a razor blade USB-stick with the digital version of the soundtrack on it, and a deluxe book package. It’s $300 though, so if that’s not your cup of tea we recommend purchasing the CD version of the album, which is $14 (comes to a little over $19 when you add in the shipping) or the lossless digital files, which come to the same price and obviously don’t have shipping charges tacked on to them.

“People Lie All The Time”,” but we aren’t lying when we say you won’t be disappointed. Especially if you listen to that song. Trent Reznor & Atticus Ross have done it again. Bravo, guys. Can’t wait to hear the rest!